What is an Indoor Positioning System and how does it work? 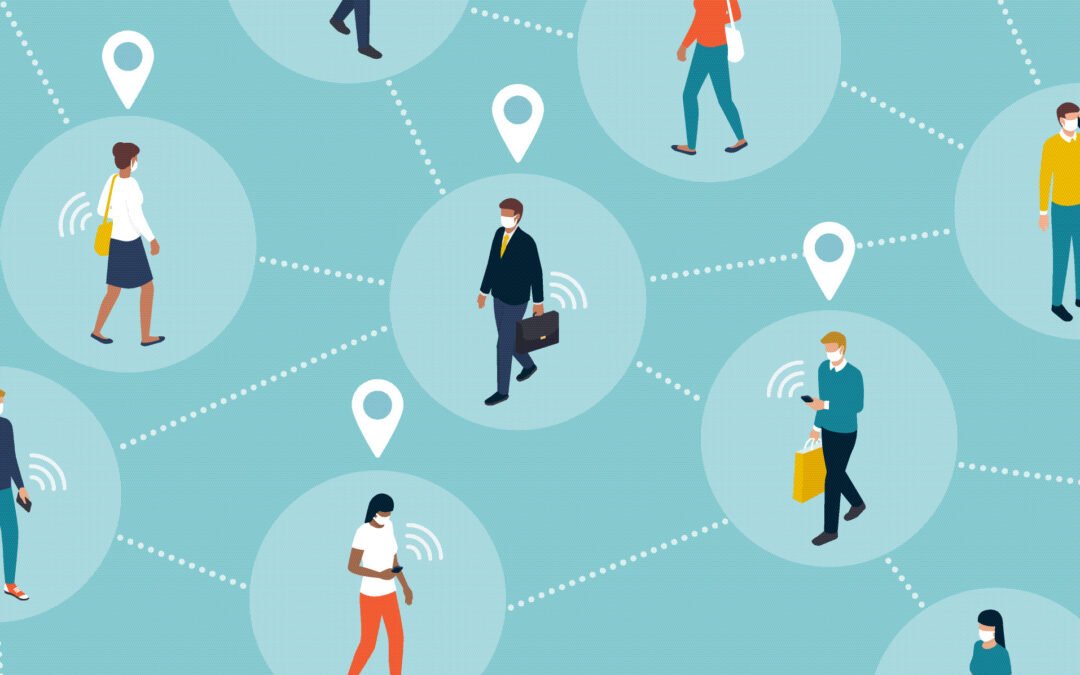 You are no doubt familiar with the concept of using GPS to navigate around the road network using your SatNav.

A plethora of smartphone applications and outdoor navigation solutions now sit comfortably in dashboards and phone holders of consumers around the globe.

A network of satellites sitting above the Earth enables the precise location of an object to be known by latitude, longitude, and altitude.

The Global Positioning network depends on signals between the object receiving them on the ground, and the satellite. However, buildings get in the way of those signals.

Global Positioning Systems do not work, or have limited capabilities, when it comes to indoor locations. The roofs, walls, and other structures compromise the microwaves to such an extent that precise positioning is seriously compromised.

Buildings act as a shoreline to stop satellite signals

And, like the waves of the ocean, when they come crashing into the shoreline, signals are unable to get any further.

But as you may expect, technologists have found ways to solve the problem.

In a nutshell, an indoor positioning system (IPS), is GPS for spaces where those satellite signals either do not work or are corrupted by infrastructure, or people.

In essence in indoor scenarios the signals from the satellite have been replaced with another type of signalling system.

But there is, as they say, more than one way to crack a nut, and technology experts fit their solutions into four main categories. These are worth exploring in more depth, because they can be used alone or can be mixed up depending on the location solutions required.

Near field communication (NFC) tags and QR Codes can communicate location information to smartphones. If the smart phone is close to the tag or the code, it will tell the phone where it is on the planet.

The location of a moving smartphone or similarly Bluetooth-enabled device can be determined by the use of beacons. Bluetooth Low Energy (BLE) beacons emit signals that can be received and interpreted by smartphones. The user’s position can then be worked out in relation to that beacon. But, as any mathematician, astronomer, or gunnery expert in triangulation might tell you, to be able to determine a more precise location, the more beacons there are, the better.

Wi-fi access points and ultrasound devices can be used in much the same way as Bluetooth Beacons to locate any enabled device.

Visible light communication (Li-Fi) devices have their own unique identification, which can allow receivers to determine accurate positions.

Signals can be measured in two ways to gauge location. These are by measurement of the relative signal strength, or the time it has taken for the signal to reach the receiving equipment.

Thinking about waves spreading out from a stone that has been thrown into a pond, they lose strength the further away they are from the impact point of the pebble. That’s the Relative received Signal Strength Indication (RSSI) method.

But rooms and dynamic environments give the signals more things to bounce off and interact with, including human beings. This means the accuracy of the RSSI method is poor.

On the other hand, Time of Flight (ToF), works like radar or sonar, by bouncing a signal off the receiver, and by measuring the difference between the time it was sent and time it was received.

Both RSSI and ToF are able to use Bluetooth Low Energy (BLE), Ultrasounds, and Wi-Fi. Ultra-Wide band also provides very accurate positioning by using Time of Flight to compute distances between receiver and emitters.

There are different methods of fingerprint positioning

In this method, the technologies use signal measurements across buildings to compute the position of an object that is moving. It is particularly well suited for Bluetooth Low Energy (BLE) devices which emit signals that are stable over time.

There are different methods of fingerprinting, including using variations in the earth’s magnetic field. However, the magnetic field is unstable from one moment to the next so this is not a particularly reliable method.

Photo fingerprinting is based on the analysis of images of the inside of rooms, comparing one image to the other. But these environments can be dynamic, often changing, with objects added and taken away. To provide reliability and stability this method requires that the images are regularly refreshed.

This method utilises a sensor in a smartphone – the accelerometer – to determine its velocity (speed). When the speed of something is known, and there is a difference in time, the distance of an object – the smartphone sensor – can be mathematically worked out.

Accelerometers are little miracles buried deep in the workings of smartphones. They measure changes in orientation in three dimensions and allow the phone to “know” how it is being held in relation to the planet.

Smartphone users will be familiar with the way a screen view can change from a vertical display to a horizontal display, depending on how it is held. The accelerometer is the technology that tells the smartphone which way it is being held up.

Similarly, if you have one of those apps that displays where the stars are in the night sky, and it changes depending on how you hold up the phone, the key part of the smartphone’s internal working is the accelerometer.

In terms of the location of a smartphone in an indoor setting, when its starting location is known, and its movement is also known, the current location can be computed.

However, because the sensors are small, and tiny errors can add up, this method is not a particularly accurate way of determining precise location. It’s a valuable as an option if absolute precision is not necessary.

Basically, this is where an environment is mapped and the location of something is determined at the same time.

Street View then allows someone to look at what is in the surroundings when they drop the icon into the place they are examining.

Using the same principles, indoor spaces can also be mapped in three dimensions, by using cameras in the same way. As GPS does not work indoors, the other ways of determining location then come into their own.

Depending on what a client needs, and they may not need high accuracy for every project, it is possible to mix and match solutions.

This is known as “sensor fusion” and can enable the reuse of existing technology to provide the desired indoor positioning solution.

However, because of the complexities involved in merging systems and technologies, it may not be the most cost-effective way of providing a solution.

For example, Wi-Fi access points not only provide a way of getting internet access but also indoor positioning.

How Can Indoor Positioning Systems Be Useful?

Taking an end-user’s point of view, how many times have you been in a shopping centre or a museum and want to know where your favourite shop is, or if you want to get straight to some exhibit?

An indoor positioning system can and does help customers get straight to where they want to go by using a smart phone. Indeed, users can explore venues in Virtual Reality well before arrival, improving accessibility and mobility.

This is useful in terms of customer satisfaction – for those people who want to go straight to their point of interest. Disabled people can also plot their routes before arrival, for example, getting to know the location of lifts and platforms at railway stations.

But there is much more to it than just navigation. Briteyellow’s BriteLocate3D system can, for example, use the power of Augmented Reality and Virtual Reality to deliver enhanced experiences to end users. Customers can have many types of tailored content delivered to them, including games and films.

In this way, indoor location systems can also help marketers. If you know the location of a customer in a shopping centre who has signed up for alerts, they can be sent special offers.

For example, because the motion of individuals can be tracked and aggregated, heatmaps can be generated. This means that pinch-points can be identified, and venue managers can take action to remove them. In this way people flow can be optimised around key locations, such as retail units, helping improve profits.

By monitoring footfall, different locations can be compared to see how busy they are at different times, compared to the volume of passers-by.

Footfall flows can in this way be monitored to discover where people are walking, and the routes they are taking. As with our project at Blackfriars railway station in London, the information can be used to identify where retail assets can be helped to perform much better.

Combined with the use of tags that can be placed on equipment and staff, venue managers are able to know the precise location of assets, which they can direct quickly to where they are needed. This saves time and helps improve productivity.

Because indoor positioning systems generate huge amounts of data, much useful information can be gleaned and successfully used by the operators of large venues.

Indoor positioning is much more than it looks at first glance, and an increasing number of businesses around the globe are waking up to its ability to help them and their customers.

Looking into the future

Briteyellow believes we are on the cusp of a future where the management of indoor locations by using powerful indoor positioning systems takes its place in fully integrated smart cities.

Smart cities are already taking shape across the globe, in Barcelona, in the Chinese super-cities, in the US, and in London and Milton Keynes in the UK.

Smart technologies are already changing cities, with huge possibilities to change lives for the better.

Large venues such as airports, offices, university campuses, railway stations and museums will take their place as cities become smarter. Data will provide the oil as the smart wheels begin to turn, with the potential to change the way that buildings are used and managed.

Things like 2D maps on the walls in shopping centres will become a thing of the past, as people navigate around them in 3D. Venue managers will know where all their assets and people are in real time, making for much greater efficiencies.

Urban design and planning will improve as the data is analysed. People flow data will help remove unnecessary obstructions, and help people get to where they want to go without fuss.

It is a hugely exciting future and Briteyellow is committed to using our technology to help our clients to bring smarter wireless solutions and indoor location applications to market much faster.

Since 2009 we have used evolved into a leading innovator in the global indoor location technology market.

Let’s join together in this journey to a smarter future.